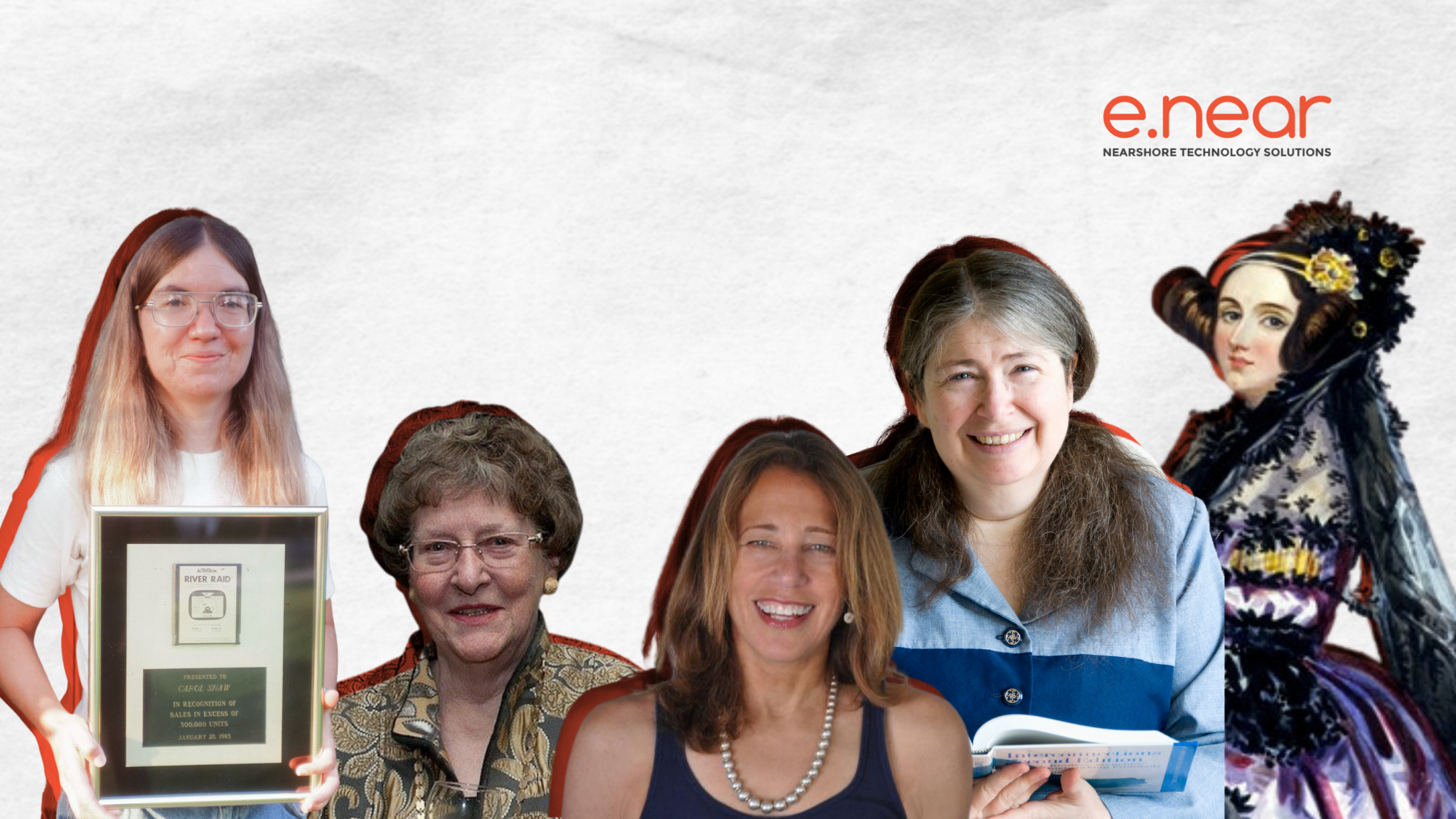 From a visionary Computer Programmer of the 1800s to the woman who helped non-tech people be able to use computers. These are 5 of the women who shaped our reality with their brilliant minds.

Innumerous women have made significant contributions to technology as we know it. Even during times where women were put aside on such matters. However, history seems to have overlooked these amazing achievements.

To join the celebrations of this International Women’s Day, we picked 5 amazing women who invented groundbreaking solutions, some of them by defying the standards of their time. We present you 5 of the many women who helped to set the future so it could be our reality: Ada Lovelace, Carol Shaw, Elizabeth Feinler, Radia Perlman, and Susan Kare. 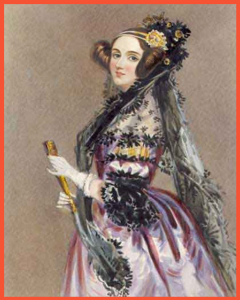 Ada Lovelace, who lived during the 1800s, is widely known as the “1st computer programmer”. Her gift for mathematics was visible from an early age. When she was 17, she met Charles Babbage, a mathematician and inventor that’s known as the father of the computer. He invented the “Difference Engine”, meant to perform mathematical calculations. They became friends and eventually he turned himself into her mentor. Hence, Lovelace had the chance to be familiar with the machine. But the truth is that she became fascinated by it.

Later on, Babbage asked Lovelace to translate an article written in French by Luigi Menabrea about his “analytical engine” – an algorithmic machine. But Ada Lovelace did more than that. She translated the document but also added her own thoughts and ideas. She depicted how codes could be created for the device to handle not only numbers but letters and signs as well. Besides that and other visionary concepts, she formulated how the engine could repeat a series of instructions – a looping. Computers still use this process nowadays. Her work was published in a science journal under her initials “A.A.L.” in 1843.

She was probably the first person to foresee ideas that were eventually used in the creation of modern computers. She theorized that numbers could also represent data. And that it could be done in such a way that machines would be able to perform numerous tasks. Ada Lovelace was somehow a visionary who saw the possibility of the computer age. But it was not until the 1950s that her work was properly recognized. Her contributions to the field of computer science were discovered by B. V. Bowden who republished them. Ada Lovelace is now considered the first computer programmer thanks to this rediscovery of her work. 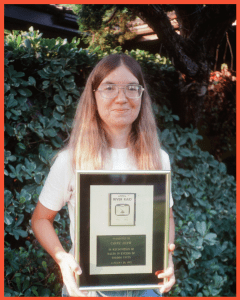 Carol Shaw was born in 1955 in California. She’s recognized as the 1st professional female videogame designer. During high school, Carol excelled at maths, loved playing text-based games and used a computer for the first time. In 1977, she concluded her bachelor’s degree in Electrical Engineering and Computer Science. After that, she continued her studies by enrolling in a master’s degree also in Computer Science.

Although she had several job offers, she decided to settle with Atari, the company that popularised cartridge-based games. She thought it would be fun and they would pay her to “play games”. So, in 1978, she was hired by Atari and became the first female game developer. By then, developers would create the whole game. Meaning doing the programming, the sound, and the graphics as well.

In 1980, “Tic-Tac-Toe”, created by Carol Shaw, was the first video game designed by a woman to be commercially released. After that, Carol worked on other games as well, such as “Video Checkers” and “Super Breakout”. She left Atari and joined Activision, where she developed and designed “River Raid”, a scrolling shooter video game for the Atari console that sold over a million cartridges. In 2017, The Game Awards presented Carol Shaw with the Industry Icon Award. 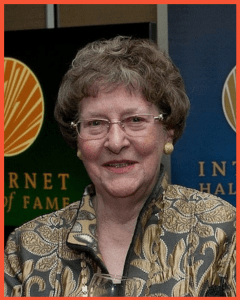 Her office was in the same building as Elgerbart’s. He was the one who invented the NLS, a computer system predecessor to what is the modern personal computer. And Elgerbart would go to her for organizational advice. Eventually, he hired Elizabeth to work on the Network Information Center (NIC) and introduced her to the world of Networked Computing. She got a task to create a Resource Handbook for the Advanced Research Projects Agency Network (ARPANET), a network that connected various research centers across the United States. It should be a resource-sharing network for scientists. But in fact, what Elizabeth Feinler produced was the first documentation of the Internet’s technical infrastructure.

The NIC  ran the network’s central address servers. These were the machines telling the whole network where everyone was located. So, it was where people would go to get new addresses. It was the place where documentation and directories were published for what was later named “the internet”. It was, according to Elizabeth Feinler, a “prehistoric Google”. There, the place that oversaw the use of internet addresses before the arrival of commercial outfits, Feinler’s group created the first host-naming registry and the current domain naming system. That project was the roots of the Defense Data Network (DNN). Elizabeth Feinler was therefore greatly involved in two of the forerunners to the internet: ARPANET and DNN.

Radia Joy Perlman was born in 1952. She attended MIT, where she concluded her Science Bachelor and her Science Master, both in mathematics. She is known as “The Mother of the Internet” because she has made significant progress in diverse areas of Internet routing and networking protocols, making it possible.

During the 1970s, some scientists and programmers were focused on assembling the networks and technology to enable its creation. And Radia Perlman was one of the involved. After her formal education was completed, Radia accepted a position with Bolt, Beranek, Newman (BBN). BBN was an American research and development company that developed software for network equipment. Later, in 1980, she joined Digital where she quickly came up with a solution for one of their biggest problems. They wanted computers to share information reliably, and that’s what she did. She invented the algorithm behind the Spanning Tree Protocol (STP), an innovation that made today’s Internet possible.

The STP provided automatic backup paths if an active link fails. Meaning it would leave a single active path between any pair of network nodes. To assure that data is delivered whenever a user/machine calls for it, the STP certifies that a network remains configured in any event. This concept was adopted as a standard by the Institute of Electrical and Electronics Engineers (IEEE) and remains in force.

In 1988 she obtained her Ph.D. in computer science from MIT. Throughout career, she has earned about eight dozens of patents. She wrote or co-wrote two textbooks and was a professor at Harvard University and the University of Washington. Her contributions to the internet are countless. Even nowadays, her innovations are the basis of robust, scalable, and easily manageable link-state routing protocols. 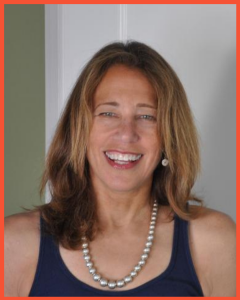 Susan Kare is known for her design of user-friendly and recognizable computer icons, typefaces, and graphics. With them, she enabled the operation of computers by non-technical users. She was born in New York in 1954 and had her formal education in Arts. But it was in the early 1980s that she joined Apple Computer and became one of the original Apple Macintosh Design team members. She was first assigned to design user interface graphics and fonts. After a while, she was promoted to Creative Director.

She having no previous experience designing typefaces didn’t stop her. She just went on to learn everything she felt needed to know. Kare created various concepts to translate basic commands into visual hints. Her belief was that good icons should be easily comprehended by users, making their lives easier. Icons would then work efficiently, just like road signs. That’s probably why even today, the modified and revised versions of Susan Kare’s original designs are present in some computer graphics tools.

The Chicago typeface, applied in the Classic Mac OS and in the first four generations of Apple iPod, is one of her most notable works. When it comes to symbols, Karen has a long list of innovations: from the symbol on the Command key on Apple keyboards to the welcome screen icon that used to greet users turning on the machine. Outside of the Apple world, she joined NeXT, where she worked with companies like Microsoft and IBM. For Microsoft, she came up with the card deck for Windows 3.0’s solitaire game and designed several icons for Windows 3.0. Some of these remained unchanged until Windows XP.

Know more about us
Although we chose these 5 women to celebrate this day by acknowledging their achievements, many other women were technology creatives. Innumerous female groundbreakers made major contributions to shape the world of technology.

Gladly, women have always been key parts of e.near. Having Inês Malheiro, a young woman, as Founder & CEO of this company was probably crucial for having us taking this route from day one. It helped to make e.near what it is: a company that fights to consciously see beyond gender stereotypes.

Having in mind that many other names could be on this list, what other women would you add here?

Are you in need of an amazing team?
If you’re looking for top-notch nearshore services: